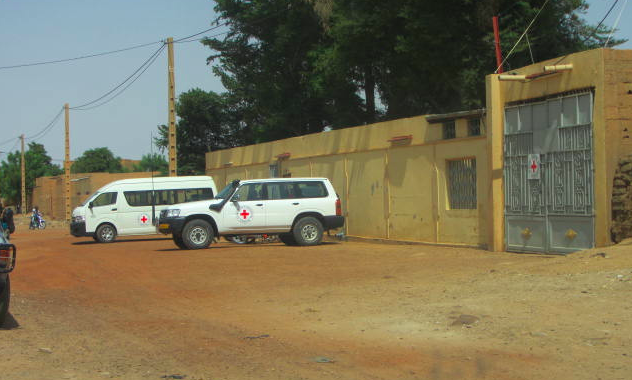 Reportedly, they were four staff members of the International Committee for the Red Cross (ICRC) initially kidnapped, and one was released and three currently remain in the hands of Ansar al-Din. Ansar al-Din reportedly claimed responsibility of the kidnapping.

The abduction of ICRC staff is overshadowed by Kidal protests although both are partially connected. French forces have been conducting an agressive operation around Abeibera village where ICRC employees disappeared the night of 15 – 16 April. Because of security and traveling in Kidal region ICRC staff always hire local guides to assist. However ICRC team lost their guide because he was arrested by Barkhane for unknown reasons until now. After the arrest and while the team was heading back to Kidal city, unknown individual in a motorcycle intercepted their vehicle and asked them to follow him. He claimed that a community representative would like to meet with them. While one ICRC employee is released, the three remaining are believed to be held by Ansar al-Din , a group with strong access to local communities in Kidal Region as I discussed in previous post. It’s also know that Ansar al-Din collaborate closely with AQIM brigades operating in the area, including al-Ansar and Youssuf Ibn Tachefin brigades. Ansar al-Din is reportedly demanding the release of ICRC guide arrested by  Barkhane.

There are more questions than answers at this point. Why the kidnappers are asking the release of ICRC guide? While this could mean ICRC staff are held by members other than AQIM or Ansar al-Din but Ansar al-Din claiming responsibility is confusing. The group in recent months been relying on its media outlet Rimah to release official statements. However this claim was communicated through a phone call to AFP office in Bamako, made by a member of the group identified as Nourredine ag Mohamed as RFI and Sahara Media reported. In exchange to release ICRC staff Ansar al-Din is demanding the release of Miyatène ag Mayaris, ICRC guide arrested by French forces sometimes between 13 – 15 April.

Since ICRC members kidnapped are highly likely Malians, Ansar al-Din is not asking for ransom. There are no information about the outcome of the staff if Ansar al-Din demands are not met. To stay positive and optimistic, execution is not likely to occur since staff are local and will not serve the group’s image within local community. True Ansar al-Din have executed locals, but in different circumstances since were accused of directly being involved in the fight against jihadist groups. Unlike ICRC staff that are there to help and population in need due to absence of basic services in the area.

Some questions to think about. Was the guide one of Ansar al-Din? Maybe that’s why Barkhane arrested him in first place? The whole thing is unclear and there are many things happening that we don’t know about and we will never know.

I have friends and family members working for ICRC around the world and I pray for their safety everyday as much as I do for those taken in Mali or anywhere in the world.