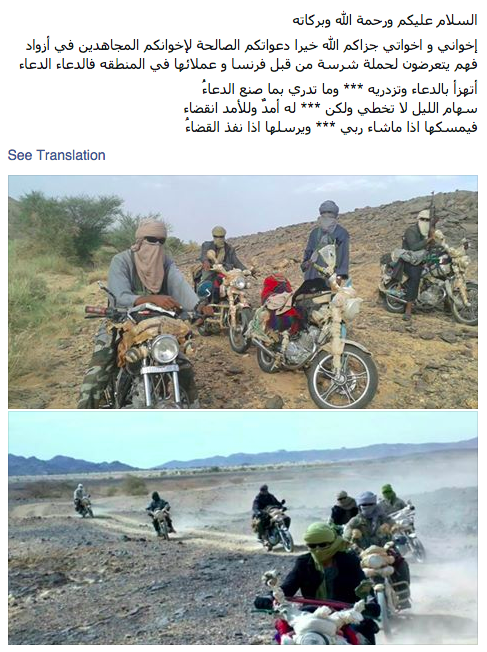 Violent extremist organizations (VEOs) operating in Mali include al-Qaeda in the Islamic Maghreb (AQIM), al-Murabitun, the Movement for Unity and Jihad in West Africa (MUJWA), the Macina Liberation Front (MLF), and Ansar al-Din. Below you will find a chronology of the attacks that occurred in February 2016, and here are few notes related to this month’s violence:

Images of VEO members claiming to be in Azawad [Northern Mali]. Members of VEOs operating in Mali conducted several attacks in the country using motorcycles.

07 February 2016: Allegedly, a former collaborator with AQIM been assassinated in Boni near Douentza, Mali. AQIM suspected to be behind the assassination after the group believes he became a traitor.

11 February 2016: Allegedly an unknown militant killed when mishandled an IED between Gao and Sévaré.

11 February 2016: Unidentified militants on motorcycles allegedly attacked group of civilians returning from Abalagh market in Niger. Seven civilians reportedly killed in what appeared to be a result of inter-community tensions. The incident took place on the border between Niger and Mali.

MINUSMA/Barkhane vehicle that struck an IED on 14 February 2016 in Kidal, Mali. Source: @assakok_6

19 February 2016: An IED discovered and dismantled in Kidal city.

20 February 2016: MINUSMA logistics convoy struck an IED 6km north of Tabankort while heading to Kidal. No casualties or damages reported.

23 February 2016: Militants suspected to be members of AQIM attacked Malian Army checkpoint in Léré. Three soldiers reportedly killed and two injured. Also two militants supposedly injured but managed to escape. Suspects arrested at Ber three days later and two taken vehicles were recovered then handed back to the Malian Army by members of the Coordination of Movements of Azawad (CMA).

23 February 2016: Malian Army vehicle struck an IED near Doro while traveling to Gao. One soldier injured.