Just Another Day of Work for NGO Workers in Northern Mali Note: The name of the NGO and the identities of its workers were not stated citing security and confidentiality reasons.

On 03 November 2015 a group of five workers for a non-governmental organization (NGO) were kidnapped and released the same day by three unknown gunmen. The incident took place south of Ménaka, Mali while the group was conducting an on ground assessment to identify vulnerable families remaining in the area. While Malian, French, and United Nations forces are present, northern Mali remains a hostile area for local and foreign national NGO workers.

The group of workers began their work around eleven o’clock in the morning at a small village 22km south of Ménaka. The village is predominantly populated by the Idoguiritane clan of Douassak Tuareg tribe. After the group finished taking a lunch break, around 13:20, three unknown gunmen on two motorcycles emerged from a valley on the east side of the village. Two of the gunmen were each carrying an AK-47, while the third one had a vest and a belt filled with ammunition.

The NGO driver and his assistant were told by the gunmen to lay face-down near the vehicle and not move. The gunmen then proceeded to grab the other three NGO workers who were collecting data inside a crowd of locals and were easily identifiable by their vests with NGO logos. Before being driven west of the village in their vehicle by the unarmed gunman, the NGO workers had their eyes covered. During the drive, the attacker threatened NGO workers telling them they would be killed or decapitated if they did not cooperate. The NGO workers were also asked about the conditions of the vehicle, its owner, the amount of fuel in it, and which organization they work for. One of the gunmen rhetorically asked the workers, “Are the Malian government not aware that working in this area is not allowed?”

After 20 minutes of driving the vehicle stopped. The gunmen collected the satellite phone and smartphones that were in the possession of the NGO workers. The workers were also searched for any valuable items or money. The NGO workers were then abandoned with a water container before the gunmen took off further west with the vehicle. With their captures gone, the NGO workers started walking east, avoiding the route which had been used by the gunmen in case they changed their mind and came back after them. After two hours walking, the NGO workers ran into a local in a vehicle who drove them to three Malian Army vehicles that were alerted of the incident. Malian forces then drove the NGO workers back to Ménaka the same day. 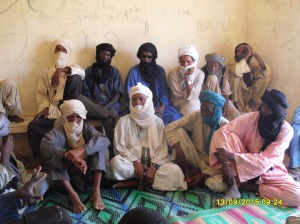 This incident is representative of the many dangers NGO and humanitarian workers are facing in northern Mali. While fortunately the five
kidnapped workers were released without harm, many questions remain unanswered. How did the gunmen know the presence of the NGO workers at that exact location, at that exact time? Clearly there are opportunists willing to provide such information in exchange for money or a certain type of reward! Although the Malian forces were alerted they had no chance to react since the abduction and robbery happened so fast. Malian forces appear to lack the capabilities and the will to pursue the gunmen, indicating the challenges of securing ungoverned spaces in the area. The most vulnerable population that depends on foreign aid and NGOs assistance inhabits these ungoverned spaces. Families that remained in these marginalized areas are at risk of being abandoned by their only hope, NGOs and humanitarians, if the security situation is not resolved.